Updated: A look at the fall and recent rise of COVID-19 levels in our wastewater

Viral load in wastewater inching up after dramatic fall 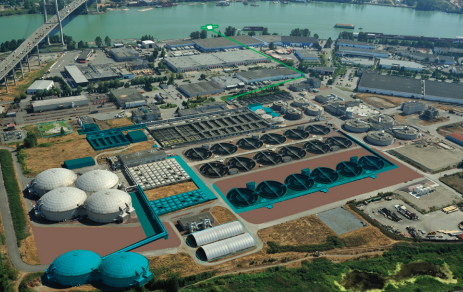 Scroll to the bottom to get the latest figures.

While far lower than the viral load recorded in January, levels of SARS-CoV-2 detected in wastewater have increased significantly since the mask mandate was lifted earlier this spring, according to data recently released by Metro Vancouver.

The decision was being made, Henry explained, due to a drop in rates of transmissions as well as a “consistent decrease” of the virus in wastewater.

Two months later, we thought it would be a good idea to take a quick look at the rates of virus in the wastewater at the Annacis Island treatment and see where the rates were and where they are. But first, a quick explanation of how it’s done.

Three times a week, researchers from the B.C. Centre for Disease Control and UBC examine untreated wastewater, testing what they find to track rates and possible mutations in COVID-19.

“Studies have demonstrated that approximately 50 percent of COVID-19 cases have the virus in their feces,” said Dr. Natalie Prystajecky, program head of environmental microbiology at the BCCDC Public Health Laboratory while speaking to Environmental Science & Engineering Magazine.

By getting separate data from each wastewater treatment plants, the information can be an early indicator of COVID-19 within the community, lead researcher Dr Melissa Glier told the Burnaby Beacon.

“It’s most informative for establishing trends—to see the increasing or if it’s stable or decreasing within the incidence in community cases,” Glier said.

At the beginning of the pandemic, researchers detected SARS-CoV-2 in the city of Amersfoort before any COVID-19 cases had been confirmed in the city.

The data can serve as a tool for health authorities to judge whether the health measures being used are effective. However, the testing can’t offer a definitive account of the number of British Columbians who are infected or contagious, according to a release from Metro Vancouver.

In early January, when daily case counts in Fraser Health were roughly in the 1,600 range, researchers found 406,000 billion gene copies of SARS-CoV-2 in one day’s worth of wastewater.

By Valentine’s Day, that figure had plummeted to 53,000 billion copies, a drop of nearly 87 percent. By that point, daily case counts in Fraser Health were in the 500-800 range.

Judging by wastewater reports at Annacis Island, the viral load continued to decrease through early spring, dropping to 29,000 billion copies by March 7, just before Henry moved to ease restrictions.

Through March and April

The viral load stayed low throughout most of March but researchers recorded 57,000 billion copies on April 2 – nearly twice as many as the previous month.

While inconsistent, the figures generally increased through April, reaching 127,000 billion copies by April 23, the highest since the mask mandate was lifted.

The most recent numbers

Cumulatively, three tests recorded between May 4 and May 9 found approximately 250,000 billion copies.

That total represents a 20 percent decline compared to three tests recorded between April 27 and May 2.

Numbers from the province

Jeremy Shepherd is the Managing Editor of the Tri-Cities Dispatch.

No Paywalls – Keep Our Nonprofit Journalism Accessible For All

Enjoyed this story? Become a Dispatcher today to support our nonprofit journalism and ensure our stories stay accessible and available for everyone. Your membership ensures we never need to put up paywalls for our stories

If you support local journalism, contribute whatever you can afford today

Gyms owners express frustration after a month’s closure of fitness facilities in B.C.

The link is now copied to your clipboard.